ICO Alert: For those who are not familiar with Latium, can you explain what it is, and what the goals of the project are?

Latium: Latium is the world’s first tasking platform to incorporate a one to many relationship and transparent rating system for both physical and digital tasks. Latium’s goal is to increase the adoption of crypto by making access easier for the everyday person, removing the complex technical requirements of getting involved in crypto by replacing it with a simple to use application. The longer term goal is to grow into a network service that can be used as a full employment suite in tandem with needed infrastructure that can be licensed by other blockchain projects with requirements such as DB, CDN, and image processing.

ICO Alert: How does the Latium token (LATX) function within the platform and why is it needed?

ICO Alert: What does the global market for task transactions look like currently? How about in the future?

Latium: As of May 2017, CNN money reported that the gig economy is 34% of the U.S. workforce roughly (54 million workers). This number is expected to grow to 43% by 2020. This is the start of a global movement towards flexibility in the workforce.

ICO Alert: What is the WINGS Foundation and how is its relationship to Latium important?

Latium: WINGS is an ICO forecasting community. Their community analyzes our offering and provides useful feedback about what we could improve. It also helps grow exposure to the Latium project and helps grow our community as well. Many users in the Wings community become active users with projects they forecast.

ICO Alert: You have an Alpha release scheduled for Q4 of 2017. Can you give us an update on the progress of the project?

Latium: We are making good progress. Front-end development is underway. Back-end development is in testing. We are on schedule for an apha release during the general sale phase. The alpha will offer limited functionality compared to the production release, but will provide users with a good general feel of how the platform will function.

ICO Alert: Can you take us through a specific use case on the Latium platform?

Latium: Because Latium offers both physical and digital task creation, I will take you through one of each.

Jan is opening a new arcade and wants to get exposure in local high schools. She uses the Latium app to higher high school kids from each local school to post flyers on the upcoming events board at each school. Proof of work is uploaded via pictures and includes GPS tags so Jan can see each task is complete.

ICO Alert: What if I purchase a task that does not get completed? How do I ensure my funds are safe when making global transactions?

Latium: Each transaction includes a guaranteed amount and total task amount. The task creator gets to set these amounts and decides who to hire based on their rating score. The task creator’s risk is known by the guarantee they set. Newer users might have to set a higher guarantee in order to attract workers. The system rewards good long term behavior and users with better ratings will get a premium over users who don’t have a high trust score. Payments are released by the task creator only when they decide (with the exception of the guaranteed amount). Funds are kept within the network for lockup periods based on user history helping to mitigate fraud within the system.

ICO Alert: Potential investors have the option of becoming an “affiliate.” How does one become an affiliate and what are the benefits of becoming one?

Latium: Anyone can become an affiliate by simply registering on the site latium.org. The benefit of becoming an affiliate is earning 5% commissions on every purchase you refer.

ICO Alert: What separates Latium from other competing task transaction platforms within the industry?

Latium: Latium offers a very different experience when compared to other task based platforms. The industry is riddled with fraud and fake providers/workers. Not knowing who you can trust is a big problem for workers and task creators alike. Latium’s simple free market design makes it easy to select the right people for the task with our transparent trust score. Latium’s unique blend of functionally, digital and physical task support, one to many relationships, and easy to use trust score set it apart from any other app in the tasking space.

ICO Alert: The Ethereum network has occasionally suffered from slow transaction times. Is there any concern that this may affect the Latium platform?

Latium: Since the hark fork, these issues have dissipated. However, we know there is no guarantee they will not reemerge. Our long term goal is to have our only chain, so we are not reliant on any third party provider’s network to ensure our quality standards.

ICO Alert: As a non-Latium question, we like to ask for unique predictions for the ICO and crypto currency space in the future. Where do you see both in the next 3–5 years?

Latium: The crypto space is still in it’s infancy. Over the next 3–5 years I believe a lot of larger/mature companies will enter the space. I think we are seeing the birth of a new Internet, where crypto is the required fuel. This industry will continue to grow, adoption will continue to increase and it will change the world over time.

The ICO is a very innovative way of funding projects. Unfortunately, with any new innovation comes abuse. I think over the next 3–5 years the concept of what an ICO is will change dramatically. I feel most jurisdictions will have some sort of regulation requirements. The amounts raised in the future will be more based on merit than hype and the percentage of companies having a successful ICO will drop to a more realistic level.

Token Distribution Information
There are a total 300,000,000 LATX being created, with 180,000,000 LATX available during main ICO. Contributors will receive their tokens on January 5, 2018. Tokens will be deposited into the ETH address specified by the contributor.

Visit the Latium website for more information and the contribution address.

Team
David Johnson, CEO / Founder
Linkedin
Davis has over 25 years of experience in development, FinTech and internet commerce, and over 20 years experience in business management. He provides the leadership and technical background for the Latium platform.

Matt Carden, CCO / Co-Founder
Linkedin
Matt helps take ideas from concept to creation. He is works with both the Latium designers and developers, and ensures a culture where both creativity and functionality can thrive.

Ben Myers, Design and Development Coordinator
Linkedin
Ben handles the day to day organization of the design teams for Latium, while also working to implement the Latium platform. He also works very closely with all aspects of the marketing teams focusing on the growth and development of the Latium community.

Moises Carmona, Creative Director
Linkedin
Moises coordinates with the team to achieve the daily needs of the Latium project. His creativity is at the forefront of the beautiful Latium design. Moises uses his comprehensive knowledge of Adobe Creative Suite, as well his considerable talent for graphic design to drive the Latium design process towards the goal of creating a beautiful and functional design for the entire Latium project.

The LATX Next Buyer Bonus 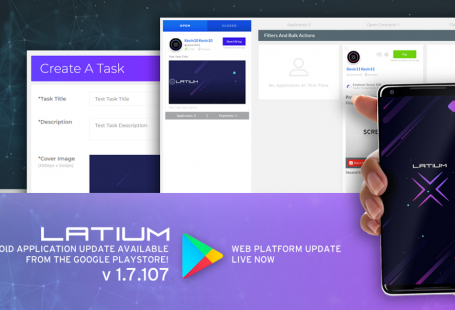